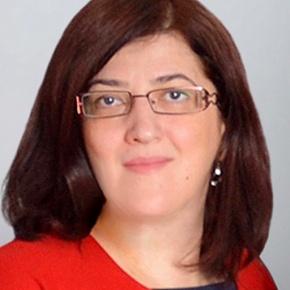 Maria-Manuela Catrina has a background in mathematics, computer science, cybernetics, as well as training in security and international relations.In the early 2000s, Ms Catrina had the first opportunity to join the high levels of government as advisor for the Romanian Prime Minister, after which she continued as parliamentary advisor for Romania’s Chamber of Deputies. Since 2013, she has been leading the Ovidiu Sincai European School, one of the Social Democratic Institute’s key projects, under the aegis of the Council of Europe.

Since 2017, Ms Catrina has joined the executive branch as Secretary of State at the Romanian Ministry of Communications and Informational Society. Here, she has dedicated her time to steering the complex preparations for Romania’s upcoming Presidency of the Council of the European Union (Jan-Jun 2019). Her mandate includes broader aspects of international relations and European affairs, as well as more specialized areas, such as cybersecurity, AI and robotics. In addition to handling the numerous European legislative files stemming from EU’s Digital Agenda for Europe and representing Romania at the Transport, Telecommunications and Energy Council, she also coordinates a number of high level national groups tasked with ensuring the security and resilience of Romania’s IT and telecommunications infrastructure.

Maria-Manuela Catrina began her political career in 1996 as a member of the Romanian Social Democratic Party (PSD). In 2000 she won the local elections to become City Councillor for Sibiu (RO). From 2010 to 2013 she led PSD’s Communication and Informational Society Department. Since September 2015, she has been leading PSD’s Social Democratic Women’s Organization (Bucharest branch), while also coordinating its training programmes at a national level.