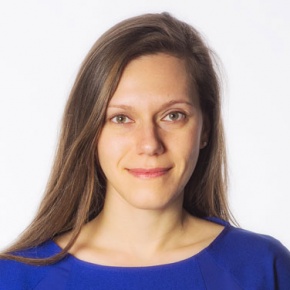 Founder and CEO,  Teach for Bulgaria

Evgenia Peeva-Kirova is the founder and CEO of Teach For Bulgaria, a leading Bulgarian non-profit  organization that recruits, trains, and supports highly motivated and capable people to become  effective teachers and agents of change in the education system. She launched Teach For Bulgaria  and recruited the start-up team in the summer of 2010 with the generous support and at the  initiative of the America for Bulgaria Foundation. The organization is  part of the Teach For All global  network (a growing network of over 46 independent partner organizations on 6 continents working  towards expand educational opportunity around the world by increasing and accelerating the impact  of social enterprises that are cultivating the leadership necessary for change.). Prior to that, right  after graduating from Harvard College, Evgenia worked as a management consultant at McKinsey &  Company where she advised various influential companies in the technology, pharmaceuticals,  industrial electronics, and non-profit sector on strategy, marketing, sales, and operations.

In 2018 she was named Young manager of the year in Bulgaria by the Evrika Foundation which made  her the first manager of an NGO to receive the prestigious award. Throughout her professional  experience Evgenia has been voted  Woman of the Year and listed in various prestigious rankings such  as Top 100 Most Influential Women in Bulgaria, Educational Innovators of the Year, Forbes Bulgaria  “30 under 30”, Darik Radio’s  “40 under 40”, and various other rankings of most influential  entrepreneurs in Bulgaria.