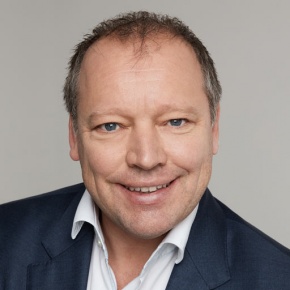 Matthias Settele (51) is an international TV manager and program expert from Austria with experience in more than 20 European markets. Since October 2013 he has been General Director of TV Markiza, the leading television group in Slovakia, a member of CME.

Matthias studied German literature and history in Vienna and started his career there as radio and TV journalist at Austria’s public broadcaster ORF (1991-96). He continued in Vienna and Cologne as executive assistant of Gerhard Zeiler, the CEO of ORF and later of Germany’s leading commercial TV channel, RTL Television (1996-98). At RTL he was promoted as SVP Business Affairs Program and News, being responsible for deal making of all local productions of RTL in Germany (1999-2006), format acquisition, marketing budgets and representation of RTL in film funds and production houses.
From 2007 to 2013 he has worked as international program and production expert via his Vienna based company SetTele Entertainment for international players such as RTL Group, MTG, Time Warner and Turner Broadcasting, as well as for local TVs, producers and institutions, and as interim program manager for RTL in Croatia (2008) and interim General Manager for Turner Broadcasting Europe for the regions CEE & Benelux and Nordic & Baltic (2012-13).

Matthias Settele has been a longtime jury member of the Austrian Television Funds of regulator RTR (since 2007) and has experience as lecturer for several Austrian and German universities. He has published three books (The Monuments of Vienna; About Albert Drach; lyrics Das schliessen der Fenster nach Mitternacht).