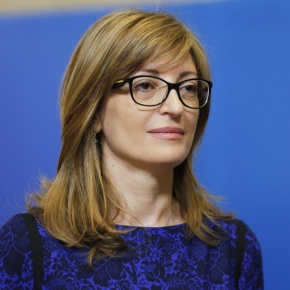 Born in Pazardjik, Bulgaria in 1975

May 4th, 2017: Elected by the 44th National Assembly for Deputy Prime Minister for Judicial Reform and Minister of Foreign Affairs of the Republic of Bulgaria in the third government of Prime Minister Boyko Borissov.

2012 – 2013 General Secretary of the Administration of President Rossen Plevneliev.

2003 – 2009: Legal Advisor and Director of the Legal Directorate in the Ministry of Environment and Waters.

Specialized at the National School of Administration (ENA) in Paris, the European Commission for Democracy through Law (the Venice Commission) of the Council of Europe, the Institute of Public Administration in Dublin, Ireland.

Master’s Degree in Law from University of Plovdiv "Paisii Hilendarski".

Married. Fluent in German and English. Awarded Honour Badge of the Union of Bulgarian Jurists.

Awarded Commander Cross of the Order of Merit of the Republic of Poland.