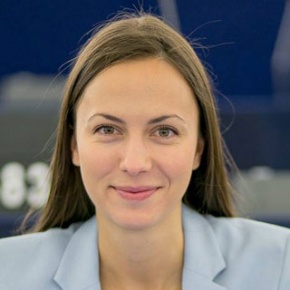 Eva Maydell (Paunova) is a Member of the European People's Party Group in the European Parliament (EP). One of her key priorities is establishing a fully operational Digital Single Market. In digital Europe, among others, she stands for thriving e-commerce, digital entrepreneurship and a tech-savvy and innovative society. She has been chosen as one of the Ambassadors for the European Commission´s initiative e-skills for jobs 2014-2015.

Ms Maydell is one of the founding members of the Digital Agenda intergroup in the EP and has been awarded the prestigious MEP Award for Best newcomer MEP 2015. She was the EPP Group's rapporteur on Copyright in the digital age, as well as the Competition policy report 2015. Eva Maydell has been active working on the Parliament's report on the Digital Single Market, as well as on dossiers related to effective e-governance in the EU.

Eva Maydell is part of the Parliament's Internal Market and Consumer Protection Committee (IMCO), the Economic and Monetary Affairs Committee (ECON) and the special Committee on Tax Rulings (TAXE). Ms Maydell is also member of the Delegations for Relations with China and the United States at the EP. In November 2015 she was ranked by "The Financial Times" as one of Central and Eastern Europe's 100 most influential people in tech. Furthermore, POLITICO Europe listed her among the 28 Europeans that "shape, shake and stir Europe". Recently, Forbes Europe included her in their '30 under 30' list of the most engaged young politicians in Europe for her efforts towards supporting entrepreneurs, SMEs and better education in Bulgaria.

As convinced European Ms Maydell is President of the largest organisation of associations and civil societies in Europe "European Movement International" (EMI), as well as Chairwoman of the Youth Intergroup at the EP, member of the EPP Young Members Network and the EU40 board. Eva Maydell is also part of the board of her party's entrepreneur organization and honorary member of the Council of Women in business in Bulgaria.