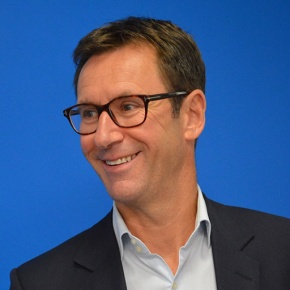 Charles Trevail is the Chief Executive Officer of the Interbrand Group of Companies, with the responsibility for the leadership of Interbrand, C Space and HMKM. He took this role in 2018, with the goal of redefining branding for the future, bringing together the collective skills of world class branding, customer experience and retail design. This is Trevail’s fifth role at the head of a company, building upon his success at the helm of global customer agency, C Space.

Trevail has been a leader in the consulting world for over 25 years. He co-founded the pioneering co-creation consultancy, Promise, in 2003, which was acquired by Omnicom in 2013 and merged with C Space. In 2014, Charles became C Space’s CEO and has led the highly successful transformation, based on the notion of Customer Inspired Growth, leading to Global Agency of the Year in 2017 and 2018.

Reinventing brands and businesses by collaborating with customers and stakeholders is Trevail’s business passion. He has advised leading companies and governments internationally, including British Airways, BMW, McDonald’s, Telefonica, and L’Oreal. The Iconic Moves he has been involved in include helping McDonald’s bring its “restaurant of the future” pilot to life in the United Kingdom (UK); Launching the world’s first flat beds in business class with British Airways; Being part of the team that brought Canary Wharf into London’s Docklands; and teaming with microfinance company FINCA on a new ‘barefoot consultant’ initiative, to raise Tanzanian women out of poverty.

World leaders have also trusted Trevail’s expertise. During the 2005 UK election, he led the team that devised the Reconnection Strategy for New Labour and Prime Minister Tony Blair, which achieved a historic third term (termed a “minor miracle” by Blair). He also worked with Al Gore and his team on launching and positioning Generation Investment Management, the leading sustainable asset management firm.

In addition to being a business expert and advisor, Trevail is a prominent thought leader. He hosts the successful Outside In podcast, described by Inc.com as one of ‘10 Podcasts that will change your business life for the better’, as well as being a regular industry speaker, judge and frequent media commentator. He co-authored Brand Together, a book on co-creation, brand, and innovation published in 2011, and has penned many influential thought pieces including “Global or Local – Which Way Next?”

Trevail, his wife Imelda, and their two college-aged daughters reside in New York City. They spent the last three years in Boston, having relocated from London. He plays soccer and practices yoga, and has interests in politics, theatre, and his home county of Cornwall, England. He is a Chelsea FC fan. Trevail also makes time for pro bono work, supporting and advising a number of non-profits doing the work that’s needed to support a sustainable, global future. He is a Board Member of FINCA International, the “World Bank for the poor.”