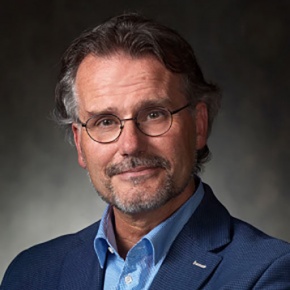 Through his small company Transform.Health as a vehicle, Lucien Engelen operates at the convergence of Innovation & Strategy for executive boards, governments, corporates, and professionals via his role as Edge Fellow for the Deloitte Center for the Edge (Amsterdam, Melbourne and San Francisco), and at i.e. Exponential Medicine (since 2011) at Singularity University in Silicon Valley.

It is at the intersection of technology and (digital) patient empowerment where Lucien feels most at home. As the former-founding director of the Radboud University Nijmegen Medical Centre REshape Center and advisor to the Board of Directors (2007-2018) and his experience in healthcare brought him on the forefront of health(care) innovation for the past 3 decades.

His modus operandi in his advisory and keynotes is always challenging, sometimes provocative but always techno-realistic. His goal is to prepare for a soft landing into the future, by bringing tomorrow’s problem to today, meanwhile creating sustainable global health(care) for all. His #patientsincluded and #nurseincluded initiatives raised the notion and the impact to include the whole system in the room worldwide.

As one of the 105 initial LinkedIn Influencers over 825.000 people follow his blog, and in his latest book ( https://lucienengelen.com/book/ ) describes what dramatic change is ahead for health and healthcare.

He is one of the inaugural members of the Washington Post' "The Collective" on change in health(care).