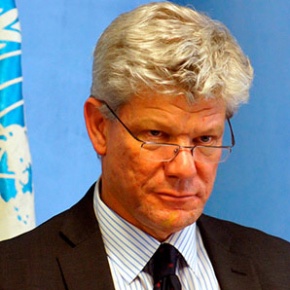 In his current role as Under-Secretary-General and Special Adviser to the Secretary-General, Mr. Hochschild is coordinating the preparation for the commemoration of the 75th anniversary of the United Nations in 2020 and related celebrations, through a system-wide process of consultations and reflections on the role of the United Nations in advancing international co-operation and in supporting Member States’ ability to respond to emerging challenges and frontier issues.

Mr. Hochschild also served as Deputy Special Representative for the United Nations Multidimensional Integrated Stabilization Mission in the Central African Republic (MINUSCA) in 2016, UN Resident Coordinator, Humanitarian Coordinator and Resident Representative of the UN Development Programme (UNDP) in Colombia from 2013 to 2016, Director of the Field Personnel Division in the United Nations Department of Field Support, New York from 2010 to 2012; and as Chief of Field Operations and Technical Cooperation in the Office of the High Commissioner for Human Rights (OHCHR), Geneva from 2005 to 2009.

He began his United Nations career in 1988 with the Office of the United Nations High Commissioner for Refugees (UNHCR) in Sudan and served in subsequent postings with UNHCR, the United Nations Relief and Works Agency for Palestinian Refugees (UNRWA), the Office for the Coordination of Humanitarian Affairs (OCHA) and in peacekeeping.  He was posted in Sudan, Jerusalem, Bosnia and Herzegovina, Geneva, New York, Timor-Leste, Serbia and the United Republic of Tanzania.

A graduate of the University of Oxford, United Kingdom, he has published studies and articles on leadership, on the protection of civilians, on transitional justice and reconciliation among other topics.

Born in the United Kingdom in 1963, Mr. Hochschild is married and has three children.