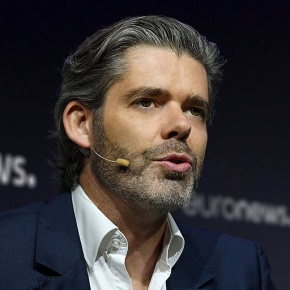 Michael Peters, born in Flensburg, Germany, to a father of German descent and a French mother, is fluent in several languages.

In May 2005, Michael was appointed Managing Director of Euronews, Europe's leading news channel, only seven years after joining the company in 1998. His time at Euronews began as Finance Manager; he was then later promoted to CFO and then Deputy Managing Director.

He was elected as CEO, Chairman of the Executive Board of Euronews in 2011, the position he holds today.

Michael Peters’ vision of Africanews materialized with a successful launch in spring 2016, with its base in Pointe-Noire, Republic of the Congo.
In spring 2017, Peters deeply transformed Euronews' historical model into a 12-edition multimediaplatform. Euronews became the world's first Glocal news brand adapting itself to the expectations of its multiple local audiences.

Peters boosted the company once again by closing a transaction in which NBC News took a stake in Euronews. NBC News made a significant investment with the goal of forming the future EuronewsNBC brand into the most influential destination for European journalism.

Michael considers himself a citizen of the world with an admiration for the culinary experience. He is an avid wine connoisseur and enjoys historical Lyon, one of the oldest cities in France, famed for its vineyards and for its cuisine. The city not only possesses internationally renowned chefs, but is also the home of the Euronews Headquarters.

Michael supports various charities and is heavily involved in educational programmes, sitting on the boards of a variety of projects.

Michael graduated from EM Lyon Business School with a Master’s degree in Financial Engineering (1995) and from IAE Lyon III (1992). He began his career at the international auditing firm Arthur Andersen, in Lyon, France.