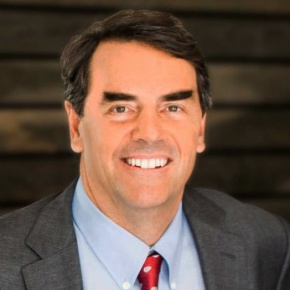 He is a leading spokesperson for Bitcoin, Blockchain, ICOs and cryptocurrencies, having won the Bitcoin US Marshall’s auction in 2014, and led investments in the companies that would issue two of the largest ICO’s: Tezos and Bancor.

He created viral marketing, a marketing method for exponentially spreading an electronic service from customer to customer, instrumental to the successes of Hotmail and Skype and other applications, particularly effective for mail and communications applications. Arguably, social media, crowdsourcing and growth hacking are all outgrowths of Tim’s invention of viral marketing.

He is regularly featured on all major networks as a proponent for entrepreneurship, innovative governance, free markets and Bitcoin, and has received various awards and honors including the World Entrepreneurship Forum’s “Entrepreneur of the World,” and is listed as one of the top 100 most powerful people in finance by Worth Magazine, the top 20 most influential people in Crypto by CryptoWeekly, #1 most networked VC by AlwaysOn, #7 on the Forbes Midas List, and #48 most influential Harvard Alum.

In promoting entrepreneurship, he created Draper University of Heroes, a residential and online school based in San Mateo, Ca to help extraordinary people accomplish their life missions. The school launched entrepreneurs from 76 countries who built 350 companies including NVision (sold for $275 million) and crypto leaders QTUM, Spacecash, DataWallet and Credo. He authored a popular entrepreneur’s text book called, “How to be The Startup Hero” and created a crowdsourced TV series with Sony Network called “Meet The Drapers,” where viewers can invest in participants. ABC Family created another show, “StartupU,” around the activity and students of Draper University. He has more than 100,000 Twitter followers.He started Innovate Your State, a non-profit dedicated to crowdsource innovation in government, and BizWorld, a non-profit that teaches young children how business and entrepreneurship work.

He served on the California State Board of Education, and led a movement for Local Choice in schools culminating in becoming proponent for a statewide initiative for School Vouchers. He also led an initiative to create competitive governance with Six Californias, followed by Three Californias, which was approved for the ballot, but was rejected by the California Supreme Court before the vote. He received the “Toqueville” Award for freedom from the Independent Institute.

Tim Draper received a Bachelor of Science from Stanford University with a major in electrical engineering and a Master of Business Administration from the Harvard Business School. He has two honorary doctorates from The International University and Trinity College of Dublin. He gave the commencement speech at USC’s Marshall School of Business in 2017.