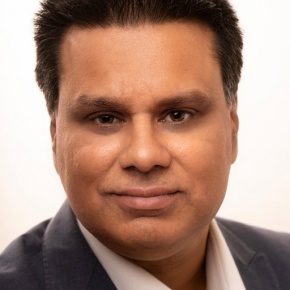 Shafi is a laparoscopic colorectal surgeon at The Royal London and St Bartholomew’s. As a dedicated trainer, educator, and Associate Dean of Bart’s Medical School, he was awarded the Silver Scalpel award in 2015 as the best national trainer in surgery by the Association of Surgeons in Training. He is currently serving as an elected member of council of the Royal College of Surgeons of England, sits on a number of advisory panels for government and also serves as a civilian advisor for the Royal Air Force.

Dr. Ahmed is always looking at ways of translating technology into clinical practice with a mission to provide affordable and accessible surgical training to anyone and everyone using the power of connectivity to allow equitable surgical care.

Shafi made world headline news in 2014 by streaming a live operation using Google Glass to 14,000 students and trainees across 132 countries.

On April 14th, 2016 he performed the world’s first virtual reality operation which was watched by 55,000 people in 140 countries, and reached 4.5 million on Twitter. Currently, He is consulting & advising for Advance Mobile Applications to develop Google glass for telemedicine and telementoring.

His passion for merging the world of medicine, global education, and virtual reality was the driver behind founding two companies: Virtual Medics which is a class-leading e-platform using wearables to facilitate medical education, and Medical Realties who are developing an exciting Virtual Reality platform for surgical training called the Virtual Surgeon.
He is also the Chief Medical Officer of Doc Health a new app based solution providing 24hr access to clinical care.

Shafi is an international key note speaker having spoken at Wired, Tedx and at Exponential medicine where he is faculty at Singularity University.  He had co-chaired The Giant (Global Innovation and New Technologies ) Health event at London’s South Bank in November 2016