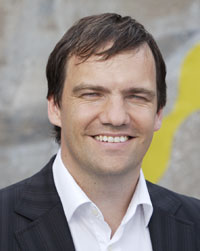 Stephan Noller, born 1970, is one of the three founders of nugg.ad AG. As Chief Executive Officer he is not only responsible for the ongoing development of the nugg.ad platform to fit the requirements of the market, but also for the development of nugg.ad as a whole.

In 2009, Noller was elected chairman of the IAB Europe Policy Committee. In this function he represents the interests of the European internet industry to political committees at the European level and will have an influence on current market developments.

Stephan Noller studied Psychology in Cologne, earning honors for his work on "Mental Models and Web Navigation." He has contributed to various scientific publications and research projects with his research into the conclusions that can be drawn from users' online behavior.

Noller brings to nugg.ad his years of experience in data analysis and the development of complex solutions for online marketing. After his work at TNS Emnid, where he was tasked with developing a new process for measuring internet coverage for the industry association AGOF, in 2005/2006 he also developed a targeting system for TNS for online advertising based on automated profiling.

V+O communications
With the support of: