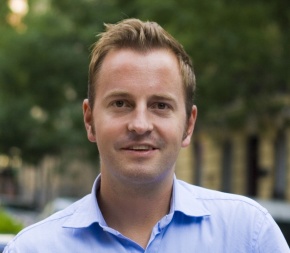 When Bernhard Niesner relocated to Spain to study an International MBA at IE Business School he didn't know that he would end up creating a new company with fellow student Adrian Hilti. Both of them had suffered long, boring and unsuccessful methods of learning a language and they wanted to revolutionise the world of language learning. The result was busuu.com, the largest and most active language learning community in the world.

The platform provides interactive language courses in currently 12 different languages combined with direct interaction with native speakers from the community, not only through the website but also through its award-winning mobile apps. In fact, it is the only app in the world to allow users to correct each other’s exercises.

The Madrid-based start-up grew from 0 to 15 million users worldwide within only 4 years – currently, more than 20,000 new users sign up every day. The company has also been awarded the TechCrunch Europas Award for ‘Best Education, Recruitment, Media Startup’, making it officially the ‘Best Education Start-Up in Europe’.

Bernhard Niesner is responsible for the overall development of the rapidly growing start-up. Before founding busuu.com, Bernhard worked at Roland Berger Strategy Consultants in the area of consumer goods and retail in consulting projects around Europe. He was born in Vienna where he graduated summa cum laude with a degree in Business Administration. He also holds an International MBA with honours from IE Business School, where he is currently Associate Professor in the area of Web 2.0 marketing. Bernhard was named Entrepreneur of the Year by the University of Vienna in 2009 and received the Award of Honour from the Republic of Austria for his academic achievements.