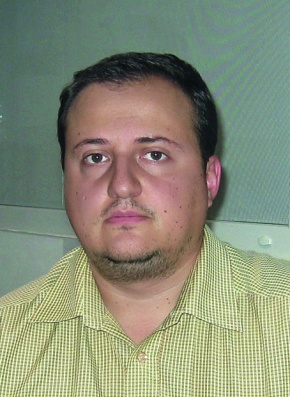 Kalin Genchev was born in 1977, in town of Varna. Kalin has a Master’s Degree in Industrial management from the Technical University in Sofia. Since 2001 he is a Marketing manager of “Billboard” JSC of the digital printing direction. Practically, he attends to the marketing of the company and the managing of the sale team, who works with more than 3000 bulgarian and foreign clients. In 2007, the company lists to the Bulgarian Stock Market and so far is the only public company in the field of advertisement and printing. Now a day, Mr. Genchev succesfully co-ordinate his other duties with the position Chairman of the Board of  directors of “Billboard” JSC.

The company “Billbord” JSC was established in 2001 with initial interests of wide-format digital print. Approving with dispatch, in 2003 the company begins investing in developing of offset printing. In this business direction works the daughter company “Dedrax” LTD. In the economy group of “Billboard” JSC, develops activity the company “Motion arts” LTD. The firm manages succesfully the advertising positions in the area of the Sofia’s Underground, shops of the trade chain “BILLA”, “Mall of Varna” and advertising constructions on the Republican road net. “Motion arts” is also an exclusive operator for the advertising areas of the Electrotransport of Sofia and holds out an excellent possibilities for vehicular advertisement of 168 trams and 78 trolley buses. Supporting a rich portfolio with various  resources for communication, the corporation is one of the leading in the outdoor advertisement.