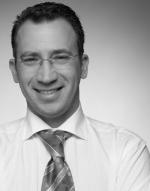 Dr. George Dimitrov is a founding partner of Dimitrov, Petrov & Co. Law Firm and head of its ICT Law Practice Group & IPR Law Practice Group. He is also a chairman of the Center for Law of the Information and Communication Technologies (CLICT) in Bulgaria and a member of the Council of the Sofia Bar Association.
Dr. Dimitrov graduated cum laude from Sofia University, Faculty of Law (LL.M. 1995) and has specialized at the Academy of American and International Law, Dallas, Texas. Holder of the prestigious Victor Folsom Fellowship, he has been awarded a PhD in Law at the Katholieke Universiteit Leuven, Belgium. He is currently a lecturer in ICT Law at Sofia University, Faculty of Mathematics and Informatics.
Dr. Dimitrov has been the leading expert and head of numerous work groups that have drafted the contemporary Bulgarian legislation in the area of ICT, inter alia, the Electronic Commerce Act, the Electronic Governance Act, the Electronic Communications Act, the Commercial Register Act, the secondary legislation on the implementation of the Electronic Document and Electronic Signature Act, on the state administration's corporate identity, the cybercrimes section of the Criminal Code, and many other acts of primary and secondary legislation. He also played a leading role in the elaboration of key strategies of national importance such as: the Strategy for Implementation of E-healthcare in Bulgaria, the Strategy for E-government, the Strategy for Bulgaria's Competitiveness on the International ICT Markets, etc. He advises Bulgarian government institutions on different legal aspects of the information and communication technologies.
He was conferred the honor to be appointed as a Bulgarian national correspondent in a number of local and international projects of the European Commission, the World Bank, the British Council, and other premiere institutions on different reports and analyses on the implementation of the EU directives in the area of e-signature, e-documents and e-governance. He is a member of the Scientific Board of the European Privacy Institute and a panelist at the Czech Arbitration Court – the only arbitration body to provide alternative dispute resolution (ADR) for .eu domain name disputes. Since 2009 he is also a panelist at International Commercial Arbitration Court at the Legal Interaction Alliance.
For a number of years Dr. Dimitrov has trained attorneys-at-law, judges, prosecutors, investigators, in-house lawyers and state officials in the legal aspects of the implementation of legislation in the areas of e-commerce, e-government and cybercrimes and has authored a number of related articles and commentaries. He has recently published his PhD Thesis, Liability of Certification Service Providers, and coauthored the chapter on Electronic Evidence in Bulgaria in International Electronic Evidence published by the British Institute of International Comparative Law.
He is a member of various committees and professional legal organizations of local and international importance, such as: the Technology and E-commerce Law Committee at the International Bar Association (IBA), the ITechLaw Association, the European Electronic Messaging Association (EEMA), etc.
Dr. Dimitrov is fluent in English, Italian, Spanish and Russian.