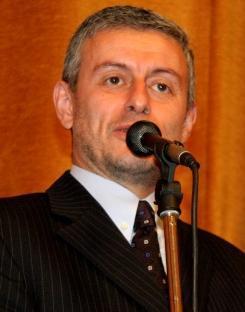 In 1990, Dr. Solomon Passy, as a Bulgarian MP, trigerred the discussion in the Euro-Atlantic World about the dissolution of the Warsaw Pact and the enlargements of NATO and EU Eastwards.

To this end Dr. Passy established in 1990 the first pro-Atlantic NGO in then Central & Eastern Europe, the Atlantic Club of Bulgaria, which later became among the most influential foreign policy think-tanks. The Atlantic Club’s impressive pro-NATO campaign was trade-marked by a spectacular accident in Sofia with the then Secretary General of NATO Manfred Woerner who was „kidnapped” by Solomon in his old Trabant. In mid-90’s Dr. Passy became the first Vice President of the Atlantic Treaty Association, ATA, elected from ex-communist Europe.

In 2004 Minister Passy as Chairman-in-Office of the OSCE, the Organisation for Security and Cooperation in Europe, launched major reforms in this largest regional organisation which are still in progress.

In 2002-2003 Minister Passy pro-actively participated in, and chaired the UN Security Council which shaped the post 9/11 anti-terrorist poilcies of the UN and the international community in general.

In 2001 Dr. Passy MP was the Chairman of Foreign Affairs, Defence and Security Committee of Bulgarian Parliament and in 2005-2009 he chaired the Foreign Affairs Committee. In 2004-2009 he launched the far sighted policies for creation of NATO-EU Synergy, NATO-China Council, offering NATO’s Membership Action Plan to Russia and developping a strategy for future inclusion of Mongolia, Cape Verde and Cuba in NATO’s orbit. Dr. Passy launched the idea for a Nobel Peace Prize to be awarded to NATO.

In 2001 Foreign Minister Passy became the architect of the successful strategy for negotiations with col. Qaddafi for the release of the Bulgarian nurses and the Palestinian doctor detained in Libyan prisons.

Between 1994 and 2002 Dr. Passy and his Atlantic Club were the driving force for the historic visit of Pope John Paul II to Bulgaria, who put an end to the speculations for “Bulgarian trace” in the attempt for his assassination.

In the 90’s, as a member of the several Bulgarian Antarctic Expeditions, Dr. Passy was a driving force for Bulgaria’s accession to the Antarctic Treaty. In recognition of his efforts, a Peak Passy is named after him on Linvingstone Island, Antarctica.

In the 80’s Dr. Passy was a freedomfighter in his country, in opposition to communist regime. He was also an internationally recognised scientist in Computer sciences and mathematical logic.

In 2009 Dr. Passy MP was the first Bulgarian nominee for Secretary General of NATO.

He is married to Gergana Passy, Minister of European Affairs (2007-2009). In 2007 Solomon and Gergana launched the idea for standardization of all charging devices for all cell phones in the EU and worldwide. The successful implementation by the European Commission of their project, from 2010 on, will be saving the world some 20 million tons electronic waste annually and will make a significant contribution to world efforts in fighting global warming.