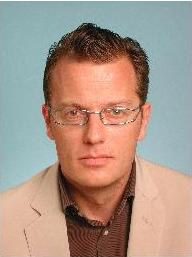 Blaž Golob is the founding Director of the Centre for eGovernance Development for South East Europe. He is also the president of the Bled Forum on Europe Research Association which organises an annual international conference on future challenges and responses of European Union.
Additionally, he is a member of the Planning Committee of the Millennium Project which publishes annual State of the Future Report on 15 Global Challenges, Chair of the Millennium Project Node in Slovenia and a member of the Business Advisory Council for South Eastern Europe (BAC for SEE).

His fields of expertises are European affairs, foresight (futures studies), policy making and law. He graduated in Ljubljana at Faculty of Law, made his specialisation on European Law at Cambridge University and continued his PhD studies in political science at University of Ljubljana. During his past work experiences he worked as an editor for business and legal magazines GV publishing house in Ljubljana (1993-1996), as a president of international NGO in Brussels (1996) and as high level official (Undersecretary) for various ministries of the Government of the Republic of Slovenia and Slovenian Research Agency (1997-2008). During his work for the Government he was twice a Head of the Minister’s cabinet namely at the Ministry of Defence and Ministry of Science and Technology. Between 2000 and 2003 He worked for the European Commission Joint Research Centre (IPTS), where he was a member of the Commission’s Enlargement Futures team. He is an author of the European Commission study-report on; S&T Institutions and S&T Policies in the EU Acceding Countries; Challenges for the Development of the Knowledge Based Economy (EC 2004).  His field of expertise is European law, policy making and knowledge economy, foresight and information society development. He plays football for Ljubljana lawyers team. He is married and has two children.