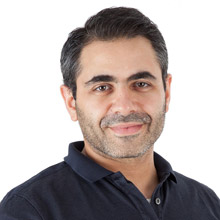 An internationally experienced manager with a strong entrepreneurial and consultancy background in the online medium, Muhammad Chbib is the Founder & CEO of Desado.com, the Middle East’s first online design destination.

Muhammad brings a proven track record to Desado.com. As the former CEO of Sukar.com, the first on-line private fashion shopping club in the Middle East, Muhammad has first-hand experience in e-commerce operations in the region as he successfully turned around, grew, and subsequently sold Sukar.com to Souq.com in 2011-2012. Muhammad decided to leave Sukar.com and use the invaluable experience to create a new venture in the sector of home décor and home design – an as-yet untapped online segment in the Middle East.

After a short stint at European software giant SAP, Muhammad started his entrepreneurial career in 2000, as he set up a B2B online marketplace based in Munich – a novel concept at the start of the new millennium. He continued serving several successful startup organizations in Europe and the Middle East.

Bringing both a wealth of international experience, gained through working in Europe and the Middle East, and a solid grasp of business fundamentals, Muhammad is focused on developing and growing Desado.com in the key areas of customer experience and overall operational excellence.

Muhammad graduated with an MBA equivalent degree from the Koblenz School of Corporate Management (WHU) in Germany. A passionate and energetic individual, he speaks fluent Arabic, German, English and French. Muhammad devotes his time outside work to his family and is an avid reader with interests as diverse as innovative technologies, scuba diving and soccer (Bayern Munich).