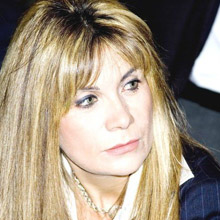 During the university studies she start to collaborate as journalist -for 4 years- with some italian publishers. After the degree –Political Sciences- in 1987, she attend to the first italian Corporate Communication Master and at the end of  1988, she starts to work as Communication Manager in one of the most important Italian newspapers and magazines sales-house: SPI Societa’ per la Pubblicita’ in Italia (Publicitas Group).

Then she works from 1991 until 1993 in a brand new newspapers sales-house: Quotidiano Italia (joint venture  between SPI Societa’ per la Pubblicita’ in Italia and  SPE Societa’ Pubblicita’ Editoriale) with the same function.  From 1993 until 1995 she works in Poland with the first –at that time- national daily-newspaper “Zycie Warszawy” with the objective to establish the new sales-house  and also working as communication and advertising manager for the TV Syndication “Polonia 1”. The owner of the two companies was an Italian publisher: Nicola Grauso.  From 1995 until 1997 she contribute to the foundation and development of the first italian internet service provider: Video On Line, working as Corporate Communication Manager and Marketing and Advertising Development Manager, starting to create the new advertising media. The first banner in 1995 in Italy was sold by her.

From 1997 until 2000, thanks to the experience matured on the Internet  combined with the advertising and communication competences, she works in the sales-house Publikompass (Fiat Group Holding) creating the first Internet Media Italian business unit dedicated to the development of the internet advertising sales. She is the chief of the sales-force  and of the relations with 35 Internet Publishers/Media Owners.

From 2000 until now she works in Aegis Group as Isobar Communications Managing Director, dedicated to the consultancy and development of interactive marketing and advertising services (media and crativity). From 2003 she is also President of IAB Italy – charter of Interactive Advertising Bureau worldwide Association, part of the Scientific Committee of Assodigitale – Association dedicated to the digital development- and member of Audiweb Board of Directors – Joint Industry Committe dedicated to the internet audience measurement.  In 2005 she was appointed President of IAB Europe. She was awarded with the “2005 Premio Bellavista” - dedicated to the key person that most helped the development of the Internet Culture” and 2007 she received from the Italian Association of Managers the “Award for Excellence” and in 2008 she was awarded from Club del Marketing e della Comunicazione as 2007 Communication Women.  In 2010 she was awarded from NC Comunicazione as “Ambasciatrice della comunicazione”