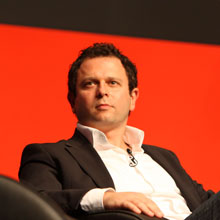 Daniel has a wealth of experience of more than 18 years helping brands make the most out of mobile, and is widely recognised as one of the global leaders in the industry. As Global CEO, he oversees Joule’s global operations and is responsible for leading the agency’s growth.  He joined Joule in March 2012 as EMEA CEO before taking up his current global position in May 2013.

Prior to Joule, Daniel was the Founder and Head of AKQA’s global mobile practice, where he was responsible for some of the world’s most notable mobile campaigns for brands including Nike, Gap, Coca-Cola, Heineken, Volkswagen, and MTV.  Whilst at the helm, AKQA created the now industry standard whitepaper on mobile internet usage and the future of the platform.

Daniel is frequently called on by national and trade press for insights into mobile marketing and a regular contributor and evangelist at global industry conferences—from Cannes Lions to Mobile World Congress.  In 2011, he was voted by his global peers as a ‘top 10 mobi thinker’. He was the inaugural Jury foreman of the ‘mobile marketing’ category in the world renowned creative awards body D&AD.  Daniel sits on the EMEA Board of the Mobile Marketing Association, IAB UK’s Mobile Leadership Council and the IDM’s Digital Council.

Prior to AKQA, Daniel was Managing Director of Associated Newspapers’ successful interactive subsidiary, Greenland, where he launched mobile initiatives with mobile operator ‘3’, EMAP, ITV, Daily Mail, and GSK. In 2000, he launched 12snap UK’s mobile marketing business running pioneering campaigns with brands including McDonald’s, Coke, Proctor & Gamble, and Cadbury. Daniel started his mobile career in 1995 as a client side marketer within Orange UK.