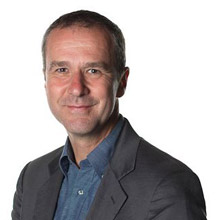 Anders Lindblad is President and Head of Region Middle East and North East Africa at Ericsson, the world’s leading provider of telecommunications technology and services.

Mr. Lindblad was born in Sweden in 1968. He got his Masters of Science degree in Computer Engineering at the University of Linköping, Sweden. He spent 6 years with the Royal Swedish Air Force working as an air force engineer and a fighter pilot.

Lindblad’s career at Ericsson began in Italy, where he held several positions in the Fixed Networks division, working in project management, sales and marketing. In 2000 he was named Head of Business Management Global Services EMEA, based in Sweden. In 2001 he joined Ericsson UK and Ireland.  As Director of Global Services GCU BT/mmO2 and Wireline Services UK, he played a crucial role in winning what was then Ericsson’s biggest outsourcing contract with O3 Netherlands.  He subsequently returned to Ericsson Italy where, as VP Services, he helped win a major deal with Hutchison in Italy.  Before becoming Head of GCA he was Key Account Manager Telecom Italia and TIM Italy.

In 2007 he was appointed President of Market Unit Turkey and Israel and when Ericsson’s new regional structure was announced in February 2010, Mr. Lindblad was named President of Region Middle East and North-East Africa, responsible for 23 countries, a role reporting to the CEO of Ericsson group and part of Ericsson’s Global Leadership team.

“These years with Ericsson have really enriched my families life” Lindblad says, “I have had the possibility to try many different roles in different environments and cultures always challenging myself together with fantastic colleagues in and exiting industry”.